Every August Singer and Farmers Wife Coreen Scott leaves the golden ripening fields of East Lothian where the harvest is in full swing and heads into Edinburgh to perform at the Fringe.

This year Coreen returns to AMC St Brides along with guitarist and vocalist Alasdair Morrison and multi instrumentalist Andy Brown.

Following their recent sell out Candlelit concert in the world famous Rosslyn Chapel this trio will entertain you with a great selection of folk, french and scottish favourites including the songs of Sandy Denny, Richard Thompson, Edith Piaf and Neil Young. 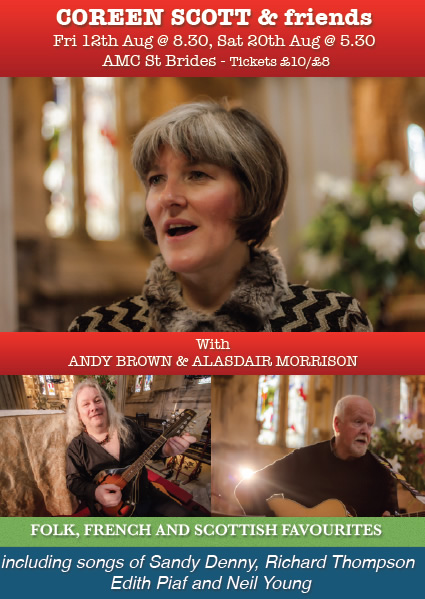 Posted in: News and Events|May 28, 2015
Theosophical Society of Edinburgh

Posted in: News and Events|January 27, 2015
Friends of Brunton Theatre

Works and Legacy of Robert Burns

Songs will include those from her recent album which has received excellent reviews.

The Strength, character and adaptability of Coreen’s voice enables her to tackle a diverse collection of songs by Tom Waits, Bob Dylan, Eric Bogle, The Springfields and Edith Piaf and many others.  “Subtle, sympathetic and satisfying” ****R2 magazine

“An eclectic collection, all faultlessly delivered with clarity and warmth” The Scots Magazine

The evening includes a glass of wine and there will be invited overseas guests, decendants of The Cranston family, who are visiting Haddington to launch the book ‘The Thorn and The Thistle’ written by Stuart Pearson and Bob Mitchell.  There will also be a special appearance of the famous ‘Cranston Fiddle’ played by talented Sheila Sapkota of Riddle Fiddles

(The album includes Coreen’s version of Eric Bogle’s song ‘Shelter’ taken from her recent  album ‘Beyond The Sea’ which she will be singing during the evening.)

THE MOTHER OF ALL BURNS

The night will begin with BAFTA winner Andrew Dallmeyer’s play, The Mother of All Burns, featuring Anne Raitt as Rabbie’s mother, and will include the songs of Burns performed by singer Coreen Scott.  The evening will continue with a celebration of tradtional and contemporary scottish songs and music by Coreen Scott and Friends with special guest Alex Hodgson